Maine Coon cat is good by nature, lively and just a wonderful pet. Maine Coons are one of the largest representatives of the family of domestic cats. They are extremely hardy, strong and very beautiful.

Any large animal species is characterized by slow development, Maine Coons are no exception. Representatives of the species reach puberty only by 4-5 years of life. Moreover, the males are very large! The females are slightly smaller in size. 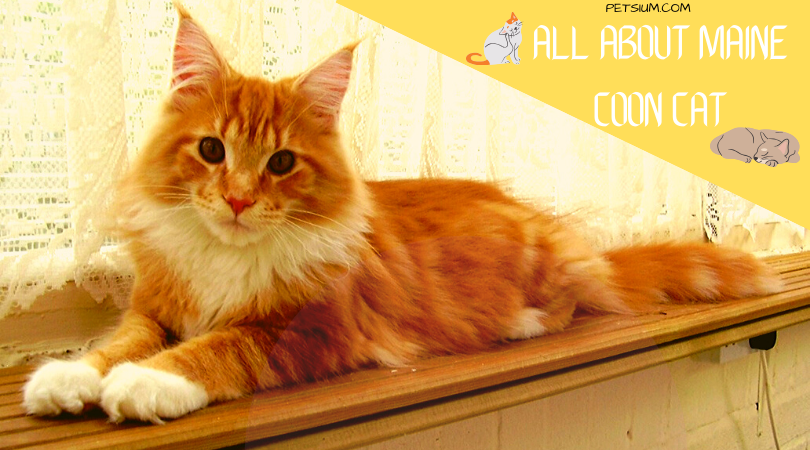 Maine Coons have a very strong developed muscular body with powerful legs ending with large round paws, with a wide chest. An elongated head of medium length (with strong square jaws), with rounded eyes and large high ears, pointed at the ends and crowned with tassels, extended at the base. Ears and paws are covered with tufts of hair.

It has been recorded that the average life span is 13 years, I would think with the right exercise and diet that your Maine Coon would see 15 years. The average weight of a Maine Coon male is around 7-11 kg and females 5-8 kg.

Maine Coon cats are instantly recognizable as the largest breed of domestic cat. They have large, strong and muscular bodies to support their heavy frame. Their body shape is considered rectangular compared to the tapered shape of smaller breeds.

They have large broad chests with a wider than normal leg stance. Their iconic bushy tail is often described as similar to those of raccoons and squirrels.

The Maine Coon fur coat is thick and heavy to keep the larger body warm during the colder months. Most Maine Coon cats have long-haired coats which are very soft and smooth, however characteristics differ between coat colors.

The length of hair differs along the body with most cats having shorter hair on the head and shoulders, longer hair along the belly, neck and ears. The coat is easy to maintain as the undercoat is lightweight, however it is important to note that molting will occur with the change of seasons.

Maine Coons posses many physical attributes that enable them to flourish in cold and harsh environments. The longer fur that is found on the underbelly is thick and water-resistant to enable the body to stay warm while lying in wet or frozen conditions.

The large tufts of fur on the ear help to warm the thin wall tissue while in high wind conditions. The bushy tail is used as a thermal seat to keep the backside of the cat off cold surfaces when seated. The tail is also used a wind breaker when it is wrapped around the face and shoulders.

Maine Coons can come in any color found in other cat breeds due to generations of crossbreeding through domestic animals. Although physical stature and shape may depict a purebred Maine Coon, cats that posses colors suggesting cross breeding such as the Siamese patterns are not recognized by breed standards.

The classic Maine Coon fur color is the brown tabby. All eye colors are accepted under the breed standards except for blue or mixed eyes, which are only accepted in the white furred Maine Coon.

The Maine Coon can be long or medium haired depending on where you live and your climate. The coat is soft and silky and comes in variety of colors some of these include black, silver, red, blue, white in either tabby or solid pattern with the allowance of any eye color. 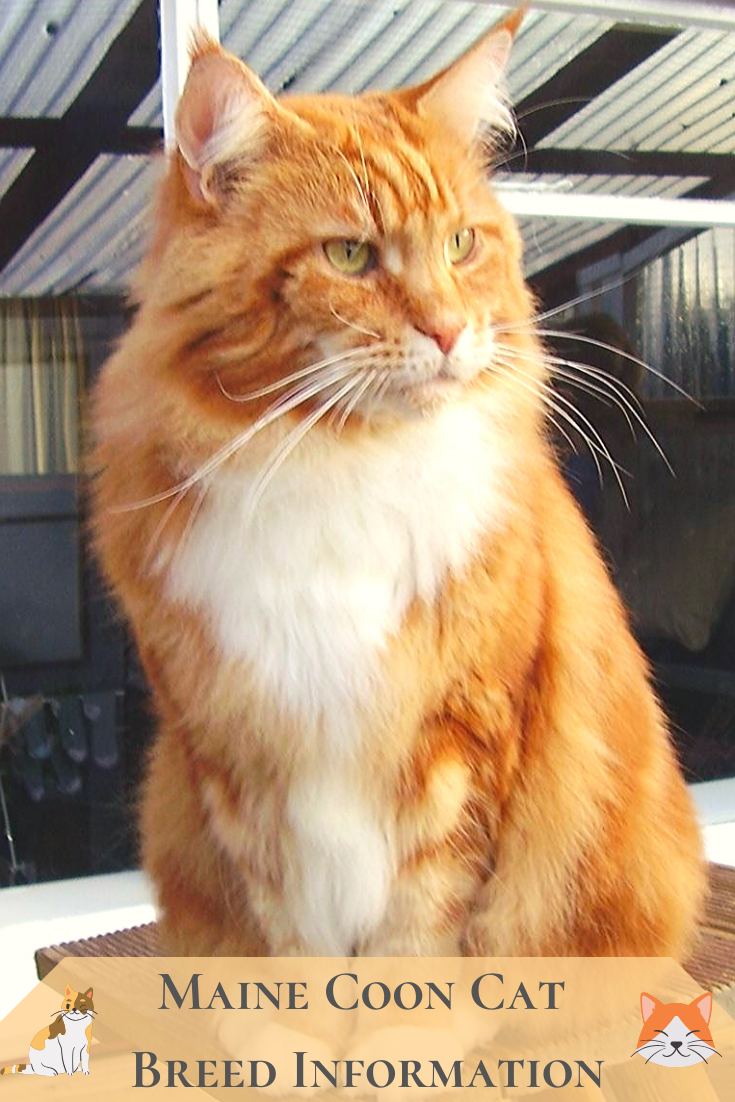 Maine Coon cat is a very loyal companion and has a very unique personality with unlimited love and affection for their owners especially children which they adore. They are curious smart and clever and very easy to train.

They will learn tricks including fetching, shake hand and walking on a harness their feet are used like we us our hands for every thing they do including eating and playing.

They are great with other animals this would include the family dog if raised together or even the pet bird.

They will stay by their owners when visitors are around and can be cautious but never mean until trust is established with strangers but this doesn’t mean they won’t show off and be the entertainment at dinner time or social occasions.

Maine Coon cats love to be with the family but if left alone they will occupy themselves with out being destructive so the furniture you love is safe. When the owners return a Maine Coon will greet you with plenty of chirping which is what they are known to do more so than a meow.

They have their little behavior quirks some of them being there resemblance to a dogs nature and loyalty. They can never just drink from a bowl with out testing the temperature with their feet or walk away from food unless it has to be buried.

They have a fascination with water. Finding a sink or bath full of water is just too hard to resist even in the winter months. Maine Coons are fun loving no questions asked gentle giant of the feline world that will delight and entertain you and be very much a part of the family home.

If you are lucky enough to be owned by more then one Maine Coon they are content to play, sleep and eat together in harmony and the mix of personalities is entertainment plus every minute of the day.

Maine Coon cat, despite their formidable and majestic appearance, is distinguished by a very soft voice, they are rarely meow, and if they do, then a person will be struck by the timbre of their voice.

Maine Coons don’t sound like other cats. They have a very distinctive trill, which some describe as a cross between a purr, a chirp, and a meow. If you talk to them, they will ‘converse’ with you. They love the sound of your voice, and want you to talk to them often. In spite of their size, Maine Coons have very soft ‘voices.’

Yes, Maine Coon does indeed shed. As any other fur-bearing animal they also needs to adjust to the variation in terms of seasons, temperature, and so on.

The average litter size for a Maine Coon is between 5-7 kittens. Naturally there can be more, or less. In Norway there has been registered 9 kittens in one litter at maximum. All survived.

For How Long are the Females Pregnant

Despite its wild appearance, the Maine Coon cat is a great house and family cat. In contrast to her size, she has a soft and gentle voice that often sounds like the cooing of a dove. Although it is independent in nature, it easily adapts to living in an apartment. A networked window or a secured balcony ensures a place in the sun and fresh air.

Maine coons are suitable for keeping at home like no other, they are funny in appearance, despite the abundant amount of hair, they do not require careful care, their hair does not fall off, because in natural conditions they had to endure harsh climatic conditions.