Do you love Goldfish? Well if your answer is yes then you need not to worry since there are so many Goldfish for sale.

Goldfish are so attractive and that is a fact. This is for the reason that their appearance can really attract the eyes of the person even if they are not that colorful. When talking about Goldfish, people tend to refer it as fishes that are in gold color.

There are more than twenty types of Goldfish. Before deciding which type is best for your aquarium, it is best to get to know a bit about each of the varieties. Below are brief descriptions of several varieties of Goldfish to help you choose the one that is right for you. 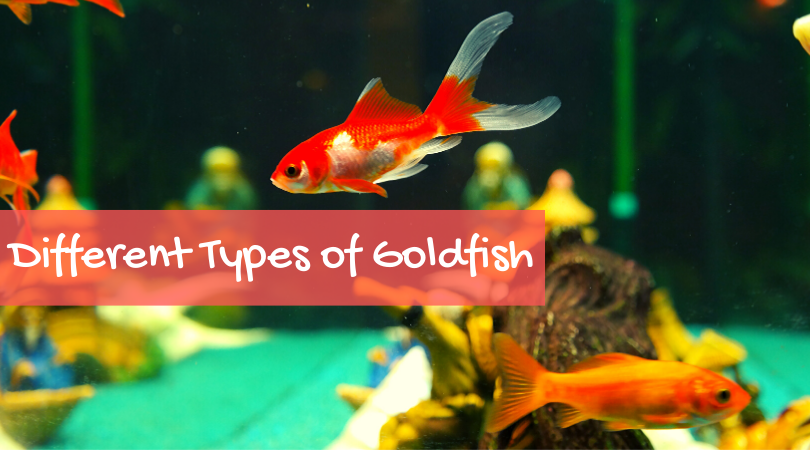 The Common Goldfish can live up to ten years and, depending on tank size, can grow quite large. The tanks should be at least 25 gallons and proper filtration is required.

Because this is a coldwater fish, you do not have to worry about heating the tank. This fish is fairly low-maintenance and is a good choice for beginners. This fish can grow greater than ten inches.

Lionhead Goldfish are another popular choice among those who are trying to add a bit of color to their tanks. While the bodies are light colored, they have a shock of red right above their eyes. This fish lives between five to ten years, and reach a length of up to six inches. The tank water should be kept around 60 degrees.

The Lionhead Gold Fish has a strange wart-like growth covering its head. This becomes visible around 4 months after birth. How well the growth develops depends on how the fish are raised.

Tubifex and bloodworms are fed in large quantities to Lionhead Goldfish types, and the water is kept free from algae. To support a good ‘hood’, Goldfish with broad heads are preferred. Culling is needed to get good specimens of Lionhead Gold Fish.

One more unique features of the Lionhead Goldfish is the lack of a dorsal fin. Those Lionheads showing traces of dorsal fins are culled. The caudal fin is double, and other fins are short.

Lionhead Goldfish types are available in matt and colored forms. The Lionhead is very delicate and often unnecessarily kept at high temperatures deliberately. It is however recommended that the water be kept warm (above 13 C) at all times.

The hard warty growth makes the gill plates inflexible and places a strain on breathing, so well aerated water is essential.

Similar in body shape to the Lionhead Goldfish, the Oranda is one of the types of Goldfish that also has warty growth covering its head. But on this Gold Fish, the growth on the forehead is most pronounced.

The hood becomes visible at approximately 6 or 7 months of age. The Oranda Gold Fish has a very prominent dorsal fin. The caudal fin is very much like a Veiltail. Colors of the Oranda Goldfish vary and include combinations of red, orange, white, yellow, gray, blue and black.

The Ryukin is specifically known for it’s hump behind the head of the Goldfish. It also has a pointy head when compared to other species of Goldfish. As far as the tail layout, the Ryukin can have numerous styles of tails. Triple tails and doubles and so forth. The coloration of this species can be calico (mixed colors) as well.

The easiest distinction to tell a Ryukin Goldfish from others, is it’s very high rear dorsal fin. The “caudal” fin is most likely twice the length of the body when measured. Colors vary to all sorts of Goldfish colors.

These Goldfish are another example of why Goldfish are a good way to add variety to a freshwater tank. This fish has long tailfins, giving them a unique look. They only grow to five inches and live up to ten years.

The Japanese Pomponis a Goldfish type that has a body similar to the Oranda Gold Fish and has fleshy appendages or pom poms hanging from its nostrils.

The Chinese Pompom, or Nariyal Bouquet, has the body of a Lionhead Goldfish and the growths from its nostrils are more rounded than those of the Japanese Pompom. They move noticeably when the Goldfish swims.

Comet Tail Goldfish (or Comet Goldfish) is the type of Goldfish was developed in the United States at the end of the 19th century. The Comet Tail Gold Fish is red, or red and white, in color and the scales are metallic.

The caudal fin is as long or longer than the slender body and the dorsal fin is deeply concave and pointed at the rear. This hardy Goldfish is one of the most active and will live and breed quite safely in an outdoor pond or Goldfish aquarium.

The fish can be kept in either a tank or a pond, but keep in mind that they will likely not survive in very cold water. This is another good choice for beginners. They grow up to six inches and can live for more than ten years.

A plump, oval bodied Goldfish, the Fantail Gold Fish is one of the more fancy varieties which will live in both the aquarium and outdoor pools. The fantail is one of the older varieties of Goldfish and is believed to have first appeared in Europe in the 16th century.

Fantail Goldfish is a type of Goldfish found in both matt and metallic versions, the latter often having the coloration of the Shubunkin Goldfish.

Veiltail Gold Fish first appeared in the U.S. as a variation of the Japanese Fantail Goldfish.

The paired caudal fins of the Veiltail are twice as long as the near spherical body, and hang at an angle of 45 degrees from the lateral line. The caudal fins are squared off at the ends, like they had been cut off with a knife. For commercial motives, some Goldfish sales people have been known to do that too!

The Veiltail Goldfish is one of the types of Goldfish that are less hardy and should not be kept in an outdoor pond or in cold water (below 10 C). Veiltails require more protein and so should be given a considerable amount of live food.

Veiltail Goldfish also require a larger swimming area, because if they swim in cramped areas, they have a tendency to damage their delicate finnage.

The Blackmoor Gold Fish appears only with telescope eyes. In fact, black color seems linked genetically to telescope eyes. No all-black Goldfish with normal eyes have been found.

Shubunkin is one of the handsome matt Goldfish types that was first bred in Japan in 1900.

The Shubunkin Goldfish is single-tailed, somewhat resembling the Common Goldfish in shape, but its coloration is unique. The background color is usually bright blue, being unevenly blotched with intense black, red, gold and brown.

The translation of Shubunkin is ‘red brocade’. In the U.K., two varieties of Shubunkin Goldfish have been developed – the ‘London’ and ‘Bristol’, both of which have similar coloration but different finnage.

Young Shubunkin Goldfish assume adult coloration fairly rapidly and if well fed, will reach sexual maturity in less than a year. But they are delicate until 6 months of age and should not winter in outside ponds until this age.

If you are wondering what on earth are those fishes who have eyes that wanted to explode and burst out then those fishes are called the Bubble Eye Goldfish.

Maybe the most abnormal looking of the other Goldfish, the Bubble Eye has two fluid sacs below the eyes. These sacs are filled with a fluid and these can easily pop.

Aquarium owners of these fish must be very careful when adding tank decorations so that the fish does not puncture these sacs. Specialists advise that these large sacs do not rid the fish of any movement or senses, but I have to personally disagree.

There are bubble eyed fish that is in red color, some are in silver like color, some are spotted, and the common are the black bubble eye fish. Actually, their eyes are the part that attracts the people the most.

Telescope Eye Goldfish are so named because of their large protruding eyes. This feature gives them a unique look which many hobbyists find appealing. The amount of care that they need is a bit more than other types of Goldfish. For that reason, these are not the ideal choice for beginners.

Their eyes are quite sensitive to damage and they have quite poor vision. Therefore, it is not a good idea to keep them in a tank with decorations or accessories that have sharp edges. They grow up to eight inches and live up to ten years.

Telescope-eyed Gold Fish have their eyes elevated by fleshy protuberances and they are found on Fantail Gold Fish and Veiltail Gold Fish. The characteristic appears when the Goldfish are around 1 month old. The eyes enlarge as the Gold Fish grow.

The Telescope Gold Fish is one of those Goldfish types which must be symmetrical, as otherwise any imbalance or lack of symmetry would make the Goldfish inferior.

Some varieties of Fancy Goldfish types have highly developed eyes and need much attention.

You need to take care in feeding these fish because they have limited vision that makes it harder for them to find food unless it is floating directly above them. Unless you have a lot of time to give adequate attention to these Goldfish, it is not recommended that you keep Exotic Eyed Gold Fish.

The above is only a few of the many varieties available. Some are easy to care for, while some require a bit of experience. Most types of Goldfish prefer to live in communities. It is not a good idea to keep a Goldfish alone in a tank.

It is also not a good idea to keep them with aggressive fish. Not all types of Goldfish can be kept together. Be sure to check that each type you would like to keep are compatible before placing them in the tank together.

Goldfish are a fun hobby. It does not have to be expensive, but it can be depending on the type of fish and accessories that you choose. Start with a small 25 gallon tank to see if the hobby is right for you. More than likely you will get hooked and soon want to expand the size of your tank.

Well combining all the types of Goldfish in one aquarium will surely make you happy.