The Egyptian Mau is the only naturally spotted domestic cat. Many owners/Egyptian Mau breeders say that Maus is smarter than other domesticated cats.  The Egyptian Mau is recognized by the CFA in 3 different colors. These colors consist of silver, smoke, and bronze. When in a good mood, they are known to make a “chortle” sound. 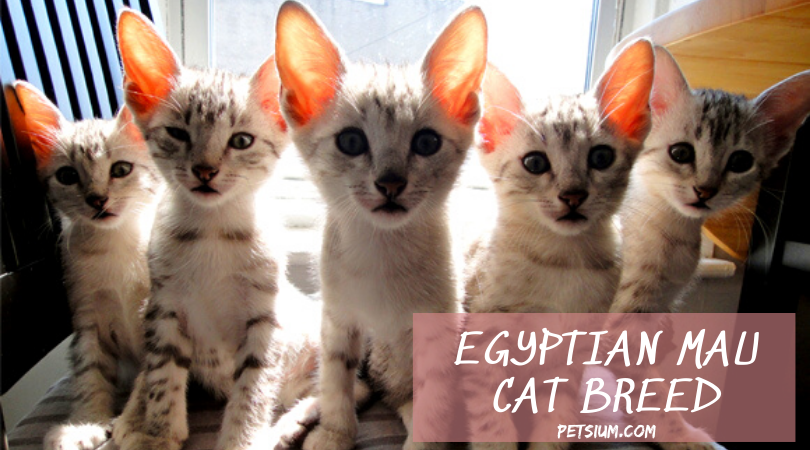 The Egyptian Mau Cat is for me one of the most beautiful, lovable and characterful cat breeds! She is a high-contrast, elegant and majestic looking cat with a radiant personality and the only breed in the world that is naturally (i.e. not bred) spotted.

Her nature is characterized by the fact that she is loving, intelligent, affectionate, sensitive, people-related and playful. She is loyal to her family as soon as she has gained the trust (although this breed has to be given time in this regard!) And loves them intensely until the end of her life. She has a special, very strong bond with her owner – this trait is something special among pedigree cats.

A Mau demands their love from their human being in a gentle but consistent way. She is soulful and does not like rejection, although she can and will learn very well, but with a lot of empathy for her individuality.

Mau does not like to be lifted (with rare exceptions) – due to their proximity to the wildcat, they need the feeling of not losing the ground under their feet. They want to keep track of things and hate to be forced to be “lucky”! For the same reason, the Mau just doesn’t like being stared straight in the eye.

When you bring an Egyptian Mau home, you absolutely have to consider its originality! She gets along very well with other cats. But she has a strong sense of “equality”.

The Mau is a medium-sized, slender, muscular cat with a weight of around 2.5 to 5 kilos, depending on the individual and gender.

Their fur can have three color variants: Silver Spotted (silver with black spots), Bronze Spotted (brown with black spots) and Black Smoke (a special characteristic of this breed because it has the only spot pattern among the smoke-colored cats), of course each up.

The coat is relatively short, silky and fine (especially with the Black Smokes). The natural spots can be of different sizes and shapes. They should be arbitrary and distributed all over the body.

The Mau’s senses are strongly developed due to the proximity to the “wild” cat and want to be practiced and occupied. With play – and variety – you shouldn’t be stingy at the Mau!

The eyes of the Egyptian Mau are gooseberry green (light green) in all colors, which I personally especially love. It is fascinating to look into the eyes of this cat, because their eyes express each of their emotions exactly – as far as one can and wants to read this “eye language”.

Her face is characterized by an “M” above the eyes, the mascara lines (which extend from the corners of the eyes to the end of the cheeks) and a particularly typical eye position, which gives the cat a naturally “concerned” expression (often as ” Did I miss the bus? “).

Their ears are medium to large in size and can also have small tufts. The paws of the Mau are comparatively small and graceful, the hind legs are longer than the front legs, which is reminiscent of a leopard when walking. When running, it can reach up to 50 km / h – it is one of the fastest cats among the domestic cats (breeds).

The history of the Egyptian Mau begins with the settling down of the people in ancient Egypt. Farming in the fields and building granaries attracted many rodents at that time.

Because of this excess food supply in rats, the Nubian black cat settled. The Egyptians quickly realized that cats kept rats away from their grain and soon people started keeping these cats as pets.

Over time, they were treated like regular family members. If a cat died of natural causes, a family funeral was held. This memorial service was followed by the ritual of embalming. This was only allowed to the kings of Egypt.

Mice were also placed in the grave to give the dead cat a good start in its new life. The Mau was therefore very important in ancient Egypt. In fact, there are even more cat mummies than human mummies.

The name Mau is derived from Egyptian and means cat or sun. From the many ancient Egyptian paintings and murals one can see the important position of the Mau cat.

Many deities, such as the Sun God Ra, were depicted as a spotted cat. She was downright adored and was considered part of religion. A cat killer in ancient Egypt was sentenced to death immediately without a trial.

If a cat died in an accident, the guilty party would face a heavy penalty. Such laws underline once again the position of this cat at that time.

They mated with one of the ambassador’s male cats. As a result of mating, two male kittens were born. One of the boys was backcrossed with his mother. With the resulting young female and two other Egyptian Mau, the Belarusian left Italy and moved to America. From this moment the breed spread again.

Like many cat breeds that are not too far away from the wildcat, Egyptian Mau kittens from around 6 weeks of age are in the so-called fuzzy phase (fuzzy = blurry).

This stage is of different length and can also be different. The drawing and coat color appear blurred during this time. The development of the color (contrast) and drawing (sharpness of the spots) is only fully completed from an age of 2 years.

The reason for this phase can be found in the original wild portion of the Egyptian Mau. Wildcats start to leave the safe nest at the age of 10 weeks and a few weeks before they take on a blurred drawing in order to be well camouflaged from predators. Egyptian Mau also has this characteristic.

Apart from that, it should be mentioned that every cat, whatever breed (or not) it belongs to, is and always remains an individual. The more important that cats must go through a good socialization process in all directions in their first weeks of life.

The character phase in cats takes place between the second and seventh week of life – accordingly, it is wise to accustom kittens to various noises, smells and people in general, especially at this time. This is the only way to guarantee that, especially with Egyptian Maus, humans and cats can enjoy their mutual existence.