Horses have been an important part of human history for ages, and documented horse facts depict how their presence has assisted mankind in advancing progress.

Some of the most interesting facts about horses lie in the way they have helped man to carve the history of the world. Often seen calmly grazing in fields, it is amazing to think of how these docile creatures have made a vast difference in the world.

Fossils dating back millions of years show the beginning of the evolution of the horse. Its ancient ancestor, Eohippus, was quite small at approximately two feet tall and was an herbivorous creature, feasting upon tree and bush leaves. Over time, scientific findings show that the genus developed into larger versions as it spread across the continents and became a grass grazer instead of a leaf browser.

The genus evolved from Eohippus to Mesohippus, and then to Hyphohippus which is believed to be the horses which inhabited the Old World. Through history, the species continued as it traveled from North America to Africa, South America and Eurasia, although the original Native American breed disappeared perhaps due to diseases.

European history derived from cave dwelling evidence shows that horses were plentiful during the early Stone Age; undoubtedly used as a source of nourishment for the people of the time. The number of horses in Europe dwindled during the Neolithic period, or latter Stone Age. Later, during the Bronze Age, evidence shows that the horse became a domesticated animal, with remnants of ancient harnesses and such found during explorations.

Horses were recognized and famed in different cultures for their capabilities; for example, Spanish horses were known for speed while European horses were famed for their strength. Breeding for specific purposes was not a recognized activity, however, until the late 17th century when the Arabian horse, facts show, was imported to England and France to merge breeds with native horses. The horse did not reappear on North American soil until the 16th century when the Spanish conquistadors brought them in on ships.

Improving and developing breeds over the last 300 years has resulted in major differences between breeds. There are over 250 breeds of horses now over the world, and can be broken down into classes of “bloods” to differentiate the breeds.

These horses are generally of large stature, gentle by nature and are utilized for working or hauling tasks. Often called draft horses, the category includes such breeds as Clydesdale, Belgian and the Shire. Large bodies and heads are features.

Easily trainable, warmbloods are used in competitions and equestrian sports. These horses were the breeds used during the Old West for cattle ranching.

Horses that are known for great speed, these equines are utilized for racing. More highly strung and excitable than other breeds, streamlined bodies exemplify this type.

Different breeds enable the species of horse to be utilized in multiple ways. For example, the Clydesdale or Belgian breeds are well known for their strength and endurance, making them ideal work horses for farming and exhibition.

Horse facts show that, in contrast, Arabian horses are swift runners perfectly adept as racehorses, while the warmblood Palomino or Tennessee Walker are great personalities for personal mounts.

Interesting Facts about Horses Throughout History

These interesting facts about horses throughout history show their undeniable value. Though appearing to be a docile and unassuming animal while grazing in the field, their ancestors have contributed a great deal to forming the world as we know it now.

A few horses have been instrumental in forming the shape of the world’s history, whether real or fictional. 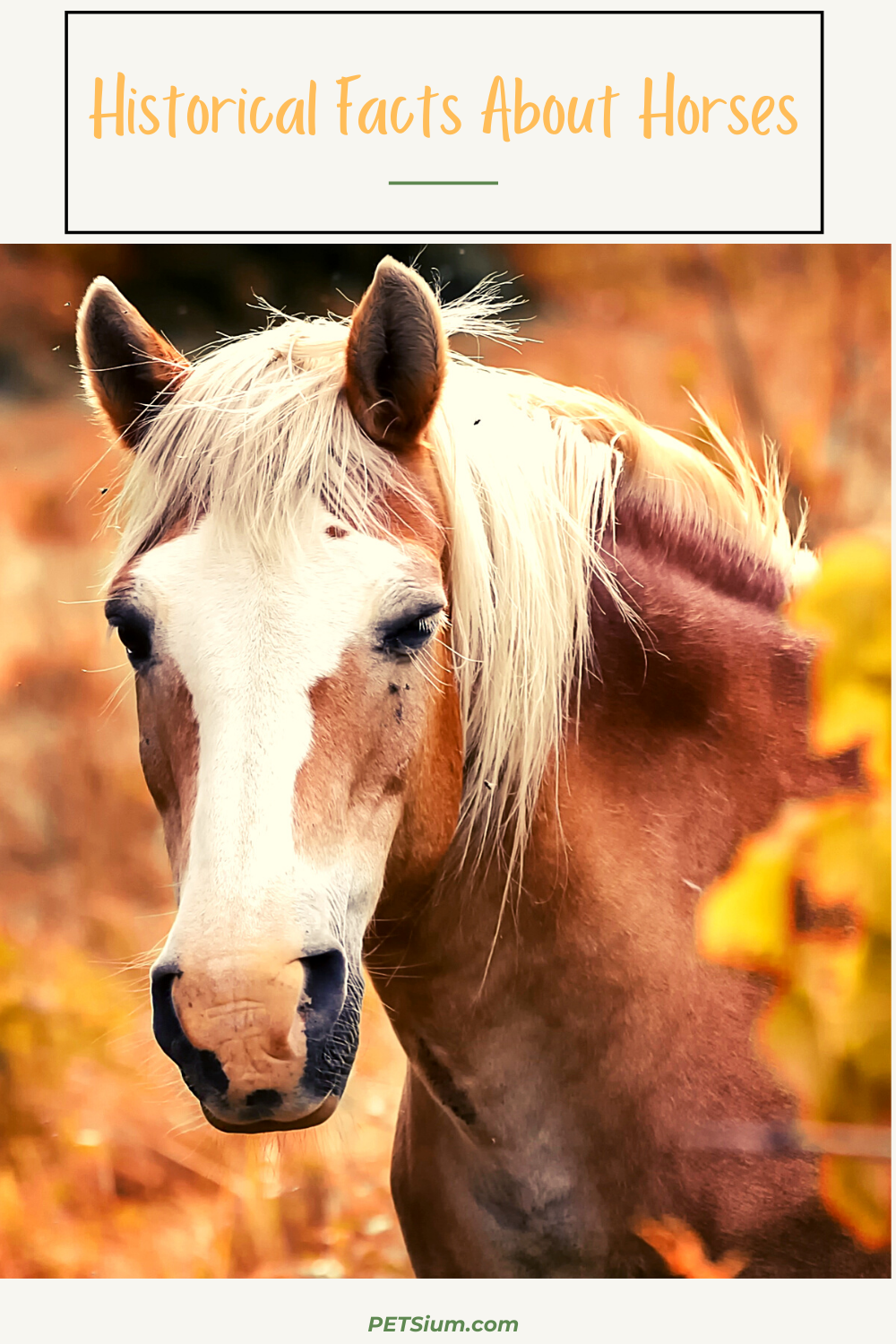 Possibly the most famous horse facts that are documented involve the steed named Bucephalus. In history, Bucephalus was the horse ridden by Alexander the Great through numerous battles and over thousands of cumulative miles as his empire was built. Bucephalus began life as a wild horse which was captured and offered as a gift to Phillip II, the father of Alexander.

Unbroken, Bucephalus exhibited many characteristics that Phillip II viewed as unbalanced. Alexander, however, saw great promise in the horse and worked gently and closely with Bucephalus until finally, the horse submitted to Alexander’s attempts to mount it.

The name “Bucephalus” was bestowed upon the horse by Alexander, who noted that the horse’s head was “as broad as a bull’s” head. The horse accompanied the boy, who became famous as Alexander the Great, throughout battles to acquire land, treasures and servants. Finally, in 326 BC, the horse died as a result of injuries sustained through the last battle fought by Alexander, who named a city after his beloved companion.

In western history, there can be little doubt that the horse Comanche stands out as a famous figure. However, stories surrounding the horse, facts or fiction, still swirl in controversy. Purported to be the only survivor of the Battle of Little Bighorn back in 1876, Comanche retired from service and, upon his death in 1891, was mounted by a renowned taxidermist so he could be displayed at a museum at the University of Kentucky as the famed mount of General Custer.

The only problem was that General Custer never once sat Comanche, even though the horse has gone down in history as such. The actual owner of Comanche was Captain Keogh, a member of the 7th Calvary who rode into battle on the bay gelding for Custer’s Last Stand. Comanche was indeed found standing near his owner after the group had been killed by a combination of Sioux, Cheyenne and other Indian tribes. The horse had been severely wounded, and after healing, was revered to the ranks of parade forerunner; never to be ridden again.

The tale of the Trojan Horse is one that has endured through the centuries. It has long been debated as to whether the event was an actual one or fictional, with no historic evidence supporting the occasion other than Homer’s reference to the war in his fictional works “Illiad”. The people of Greece, however, have full belief and confidence in the Illiad as a series of events from 450 BCE.

Occurring around the Bronze Age in Troy, the war trudged on for nine years without the Greeks having the ability to break down the walls of Troy. A large, hollow wooden horse was built, into which numerous Greek soldiers climbed and hid. The Greek ship sailed away in feigned defeat, leaving one man behind.

This man, Sinon, convinced the Trojans that the horse was of no threat but would actually bring luck to the people. Bringing the horse within the compound, the people marveled at the sight until they retired at nightfall. With the onset of darkness, the soldiers were released from the horse by Sinon and they commenced to slaughter the Trojans.

Trigger is the horse made famous in the movies starring Roy Rogers; considered to be his co-star in film and TV fame alike. Beginning his Hollywood career in 1938, the horse was first designated to star in the “Adventures of Robin Hood”, however, when the lead character failed to appear, Trigger was delegated to another movie, “Under the Western Stars”, starring Roy Rogers. It was the beginning of a long career for the intelligent steed.

While perhaps not famous, many horses have assisted humans in many walks of life. Working horses pulled plows, cleared lands and transported families to church and town through drawn carriages and wagons. Providing means of transportation for Native Americans and early cowboys, horses became the backbone of American history, and forerunners of modern day postal services through the Pony Express.

While all horses are members of the Equus family, they are found in a variety of species and breeds. The zebra, wild ass and donkeys are all members of the same order. Like humans, horses can be of many colors, sizes and shapes.

There are some very interesting horse facts that apply to all horses, historic or modern:

Today, horses are mainly used for exhibition and pleasure with the introduction of vehicles that are capable of traversing rough terrain. A number of horse varieties have evolved over the centuries; there are currently over 250 known breeds that fall typically into two different categories.

There are work horses, such as Clydesdales, which perform work of rodeo riding and pulling carriages. Thoroughbreds are the second category, and are generally a cross between Arabians and English mares. They are found on race tracks and in exhibitions.

The horse has been an integral part of the world’s history since the beginning of time. Evolving through the ages from a small fox-like animal to the modern steed used today for a multitude of purposes, there is no doubt that the horse has made its imprint on the progress of mankind.