While in our opinions the best way to learn about Guinea Pigs is through first hand experience, research is something that you can not overlook, especially when it comes to caring for a hairless guinea pig.

No matter what type of animal you have or plan to get, it really is a big decision and one that you should make only after learning everything you can…

There are two different types of hairless guinea pigs, the Skinny Pig and the Baldwin.

The Skinny Pig has wiry, frizzy hair on their head, face and paws and sometime have hair on the backs and rest of body too but generally look hairless and skinny, hence their name.

Baldwins are completely hairless. Born hairy, but soon after birth it all falls out.

There is not a whole lot available about the Skinny Pig except that they were accidentally created in labs and then used for testing in Canada for dermatological studies.

The Charles River’s Laboratory in Canada then released the “Skinny Pigs” to breeders some time in the early 80’s. The first Skinny Pigs were all Red-Eyed whites (REWs or Albino’s).

Through the hard work and experimentation of breeders crossing the hairless pigs to hairy pigs, a variety of colors emerged. 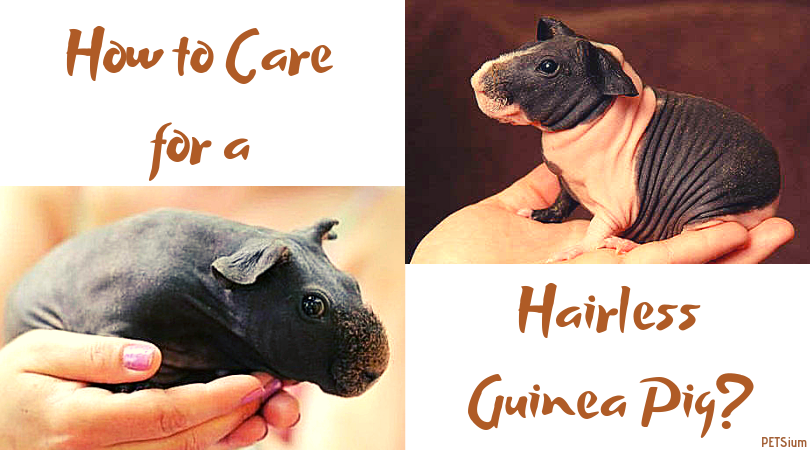 There is also still a lot of misconceptions about the Skinny breed.

You can find in books and on websites even today stating that hairless guinea pigs are less hardy and more prone to some common guinea pig disease than regulars and that is simply not the case.

Hairless guinea pig breeds are uncommon but not unprecedented. The most well-known type is the skinny pig. Even though it is not completely hairless, it comes pretty close to it.

The Baldwin guinea pig is also another hairless guinea pig breed. At birth, they have a full-coat of hair that falls out later on.

The Skinny and Baldwin guinea pig do not breed to beget another hairless guinea pig because their genes are unsuited.

There has been a bit of controversy surrounding the introduction of the hairless guinea pig breed into the pet industry. These guinea pigs were initially bred for laboratory-research.

However, trepidation about their immune system’s hardiness and overall function has been up for debate.

Nevertheless, this seems more to do with their line-of-breeding than their being hairless.

Hairless guinea pigs should be cared for like any other guinea pig; nonetheless, due to their being hairless they are more sensitive to climate extremes and must be shielded from drafts and direct sunlight.

In addition, they tend to have a big appetite that helps to maintain their body heat and metabolism.

The hairless guinea pig, or ‘skinny pig’ as breeders like to call it, is a fun and unique alternative to the traditional furry guinea pig.

Like the traditional variety, skinny pigs are smart, entertaining, and loveable creatures that make a great choice of pet for older children and adults.

If you are considering the opportunity to take in a hairless guinea pig or if you have recently done so, then you may have some questions about what kind of care this animal requires.

The sections below describe guidelines for housing, feeding, and grooming this type of guinea pig.

The only thing that separates the two on a genetic basis is a mutation that occurs in the hairless variety that causes significant baldness on the body of the guinea pig.

Some specimens may not be completely bald, but rather have a very fine peach fuzz-like coating on the body. They come in a variety of colors and may even be spotted.

The random genetic mutation that caused this species to be born without hair was discovered in a laboratory in 1978.

They continued breeding guinea pigs that carried this gene to intentionally yield hairless guinea pigs and finally released the genetically-mutated guinea pigs for purchase by the general public. 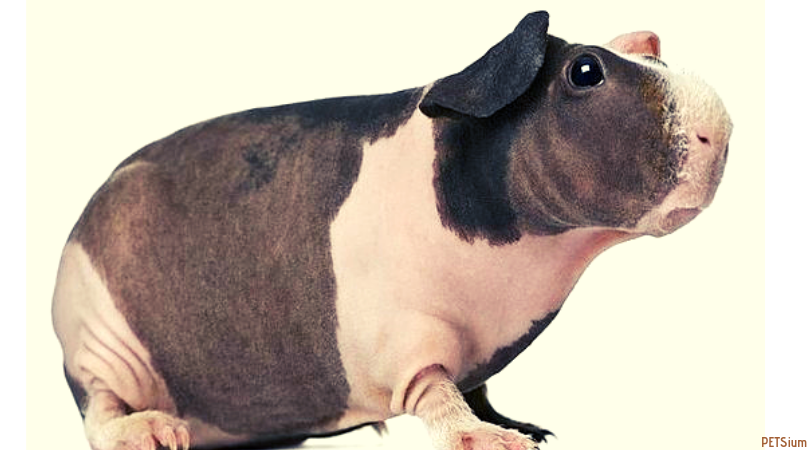 You can expect the hairless variety to be just as friendly and companionable as the traditional guinea pig.

Many owners feel that this species tends to be very empathic and can pick up on their owner’s emotions.

They are especially good at detecting good moods and will take the chance to appeal to your good nature to score some cuddles and extra treats.

You’ll find that guinea pigs really are social creatures and they can become very lonely if they are neglected the attention that they so crave, whether from owners or lack of fellow guinea pigs.

As with any other rodent, the type of housing that it will live in is very important and can have a direct impact on the animal’s physical and mental health.

Guinea pigs are sizeable members of the rodent family with an average length around nine or ten inches.

Although they may look pudgy and docile, they really do require a decent-sized living space in order to have sufficient room for exercise and to simply “live.”

One thing that you may want to consider, especially if you spend a significant time away from the house, is that guinea pigs are so dependent on interaction with others that they can become depressed and even physically sick if they are left alone often and for long periods of time.

In circumstances like this, it is recommended that a potential owner take in at least two guinea pigs initially, as they will be much happier as part of a group.

Not only will a partner help to chase away loneliness, but the potential for play and general interactions serve as stimulation for this intelligent species.

The decision on whether to have more than one guinea pig will have a massive impact on the size of cage that your guinea(s) will need.

As a general guideline, you should count on at least two square feet of cage space per guinea pig.

This sounds like a lot, but this will likely be the environment in which your guinea will spend most of its time.

The food bowl and water bottle will also take up some space.

Your guinea cage will need bedding, such as shredded newspaper, as well as a makeshift nest.

You can use a sturdy bowl or box, however anything made of cardboard runs the risk of needing to be replaced should it become soiled.

You will also need to invest in toys to keep your intelligent little guy occupied when you aren’t around.

The cage will need to be cleaned at least once a week and as necessary between the weekly cleanings. 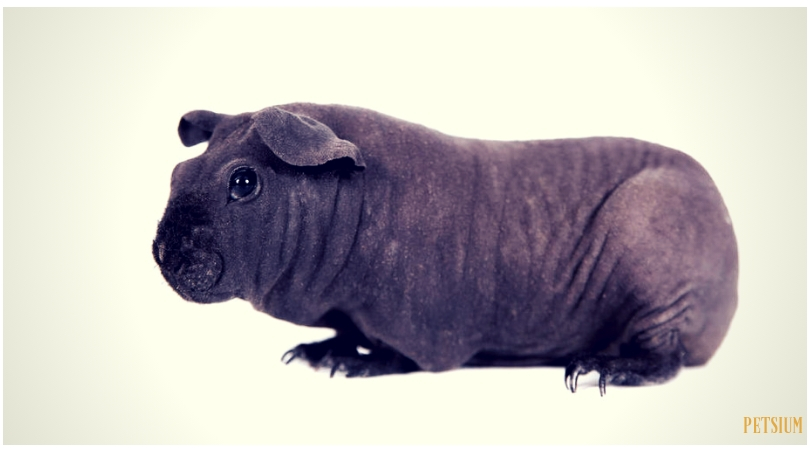 Your local pet supply store will carry guinea pig food made of grains and seeds.

All you really need to do is follow the instructions on the packaging which should tell you how much food to serve per feeding and how many times a day the guinea should be fed.

Spinach and cherry tomatoes can be given to guineas on a sparing basis.

You might be wondering how much grooming responsibility there could possibly be to keeping a hairless guinea pig.

Although the guinea pig does not have hair to become matted or dirty, it does have an issue with keeping itself warm.

If you keep your home too cool or if you were to attempt to take the guinea outside then you could inflict a serious amount of discomfort and even endanger your guinea’s life.

If your guinea is brought into a room that is a little on the cool side then you may want to wrap the guinea in a fuzzy blanket to keep it warm.

You may also need to keep untreated tree branches, chew toys, and tough fresh vegetables such as broccoli in your guinea’s cage, as these items will entice your guinea to chew and gnaw, which in turn will file down his teeth and prevent them from growing too long and becoming uncomfortable or dangerous.