Mange is a parasitic infestation and its different types are caused by different species of parasitic mites, some of which burrow into the skin while others do not. When humans are infected by these mites, which sometimes can happen when the sarcoptic mite is involved, the condition is not referred to as mange but as scabies.

Types of Mange that Can Affect Cats

There are several kinds of mange in cats, often labeled as feline mange. One of the more common is demodectic mange or demodicosis. There are three different forms of demodicosis and two of them can affect cats.

Another kind is sarcoptic mange, which is also somewhat common and can also affect humans. Three additional categories are feline scabies, cheyletiella mange, and otodectic mange.

While cats of any age can get mange, most healthy cats are immune to the disease since their immune system helps to keep any mite infestation in check. Kittens can sometimes get mange from their mothers while nursing, but usually not afterward.

Cats that are most apt to have feline mange are mostly older cats whose immune systems have become weakened for whatever reason. 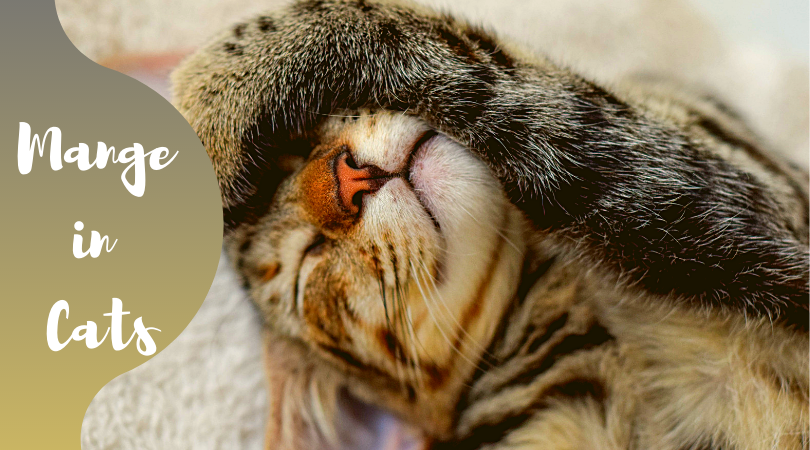 Demodectic mange is caused by mites that are so small they are invisible to the naked eye. These mites are often present in small numbers but usually do not present a problem or are at least not symptomatic of any kind of a disorder.

If a cat’s immune system is weakened for some reason, however or too much oil is being produced on its skin, these demodectic mites can proliferate and the number of mites inhabiting the cat’s hair follicles can become excessive, leading to skin problems, which will further weaken the immune system, and a potential loss of hair.

Demodicosis, or any other kind of mange, is actually rather rare in cats and consequently the disease has not been subjected to a great deal of study. What is known however is that demodicosis can be caused by either of two types of mites: Demodex cati and D. gatoi. Another kind of Demodex mite, D. canis, as the name implies, affects dogs, but it does not affect cats.

Demodex cati mites mostly affect cats that have a weakened immune system, a metabolic system disease, or a hormone imbalance. This mite is similar in appearance to the mite that affects dogs, but it is a completely different species of mite. The D. cati mite is quite often found in the hair follicles of perfectly healthy cats where it is a normal part of the follicular flora.

Alopecia or hair loss, crusting, and discharge of fluids from the follicles are typical symptoms of a D. cati infestation. An infection may also be present, although when that happens, it tends to be a secondary infection, often caused by the cat’s scratching or biting an affected area.

Demodex gatoi mites can cause a disorder that is potentially contagious and can therefore spread to several cats that happen to inhabit the same household. D. gatoi is sometimes referred to as the short-bodied feline mite in that it is roughly half the size of the D. cati mite.

Pruritus is a common symptom of a D. gatoi infestation and can be moderate to severe. If hair loss occurs, it is often due to a cat’s overgrooming rather than a result of the disease itself.

It is possible, although somewhat unusual, for a cat to become infested with both of these types of mites at the same time.

Sarcoptic mange in cats is caused by the Sarcoptes scabiei mite. It is usually referred to as feline scabies. The S. scabiei mite is also too small to be seen by the naked eye. The female mite will burrow into a cat’s skin to lay its eggs and then return to the surface. Larvae from the hatched eggs will also migrate to the surface, molt into a nymphal stage, and eventually become adults.

Both the burrowing activity of mites and their movement about the surface of the skin can cause itching. Their burrowing into the skin can also cause more severe itching as it will trigger in some cases a major allergic response.

Unlike D. cati and D. gatoi, these mites do not inhabit hair follicles, but instead prefer hairless or nearly hairless patches of skin such as in the ears or near the eyes. This mange form can at times be difficult to diagnose but its treatment is generally easy.

Cheyletiella mange, often referred to as cheyletiellosis, is caused by a mite having the same name. This mite can have a number of animals as hosts and can sometimes be found on humans as well. The animal most apt to have a cheyletiellosis problem is the rabbit, but cats and dogs can become infected as well, as this particular form of mange is somewhat contagious.

There are several different species of these mites but the differences are unimportant. As far as the host is concerned, “if you’ve seen one of these mites, you’ve seen them all.” One of the primary symptoms of cheyletiellosis is the appearance of dandruff, which at times can appear to move about due to the activity of the mites.

In most cases, an infestation of these mites will appear on the backs of cats and other animals and usually nowhere else although they have been known to invade the nostrils, which could cause your kitty to have sneezing spells.

Cheyletiella mites can also infest people but such infestations tend to be short-lived since these mites cannot reproduce while on a human host.

Otodectic mange is caused by the Otodectes cynotis mite, which is more familiarly known as the ear mite. It, though rarely encountered, is nevertheless the most common type in cats. These otodectic mites are usually located deep within a feline’s ear canal where they can cause chronic infections and considerable misery to the cat.

Otodectic mange is considered highly contagious. Any presence of this mite can be especially troublesome, as not only does the cat have to be treated, but also its surroundings may have to be treated with a hospital-grade disinfectant, including the bedding and nearby carpeting. 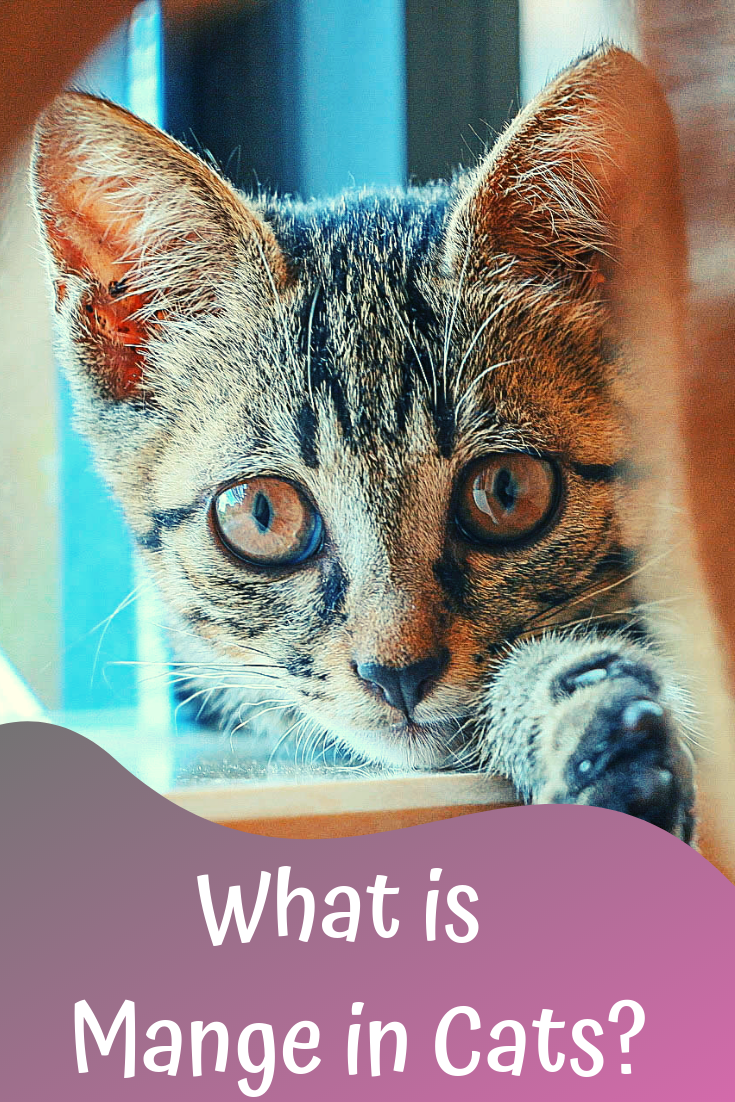 Symptoms and Diagnosis of Cat Mange

Cats will usually let you know something is amiss by their general restlessness and their scratching due to the itching the disease causes. The scratching can often be frantic and usually becomes noticeable within a week of the cat’s having been infested by an excessive number of mites.

The symptoms tend to be somewhat similar no matter what form of mite is involved, possibly except for some of the symptoms of an ear mite infestation. One of the symptoms is usually hair loss due to the damage done to hair follicles, but it can also be due to excessive grooming on the part of the cat, as was noted earlier. The appearance of dandruff is sometimes prevalent, more so from some types of mange than from others.

Diagnosis often involves skin scrapings, which are then examined under a microscope since the mites are for the most part too tiny to be observed by the naked eye. Hair samples are often taken to determine the exact type of mange or the species of mite that is involved.

Treating mange in cats primarily consists of killing off the mite population. This can usually be accomplished by one or more of several different methods.

An application of anti-mange medicine may be all that is needed in some cases, but at times a specific mange type may require a specific type of treatment, something a veterinarian will be able to determine.

Medication is usually applied topically although in some cases it may be applied by injection. A medicated dip is another approach and is probably the type of treatment your cat will like the least. Applying a medicated shampoo may suffice in some instances – another approach your cat may not particularly care for.

In more severe cases, an antibiotic medication, an anti-inflammatory medication, or both may be called for. The medications used to kill off the mites usually work quickly and effectively but it could be several weeks to a month before the results become evident, especially in the event of hair loss or if a significant amount of damage has been done to the cat’s skin.

After you’ve taken your cat in for treatment or have started treating it yourself, you will need to clean and disinfect its surroundings. Also keep it away from other cats that might have the disease. Schedule a couple of follow-up appointments with your veterinarian to make certain the mites have indeed been eradicated.