If you’re interested in caring for a goldfish, you might want to start thinking about the different types of goldfish and which ones you prefer to keep. Contrary to popular belief that goldfish all look alike with the shimmering, gold scales and flowing tails and fins, there are many different variations and each type has a slight variation from the usual goldfish look.

How to Identify Goldfish Types

Comets, Commons and Shubunkins fall under the single tailed goldfish classification. The species under this classification usually have slender bodies and a single tail that varies in size.

The double tailed goldfish has Watkins goldfish and Jikins Goldfish classified under it. These types of goldfish have slender bodies just like the single tailed goldfish. However, the distinction comes in their tails where it looks like it was divided making it appear as if it has two tails.

The double tailed with dorsal fin goldfish, unlike the previous types, have egg shaped bodies. Examples of goldfishes under this classification are Fantail, Pearlscale, Oranda, Ryukin, Moors Telescope, Pompom, Demekin, Veiltail. Aside from being egg shaped, this type possesses single or double dorsal fins.

The double tailed without dorsal fin goldfish have egg shaped bodies but does not possess any dorsal fins. Examples under this type are Bubble Eye Goldfish, Phoenix Eggfish/Egg Goldfish, Celestial goldfish and Lionhead goldfish.

As you can see, with these many different types of goldfish, you will never get bored with your goldfish aquarium! 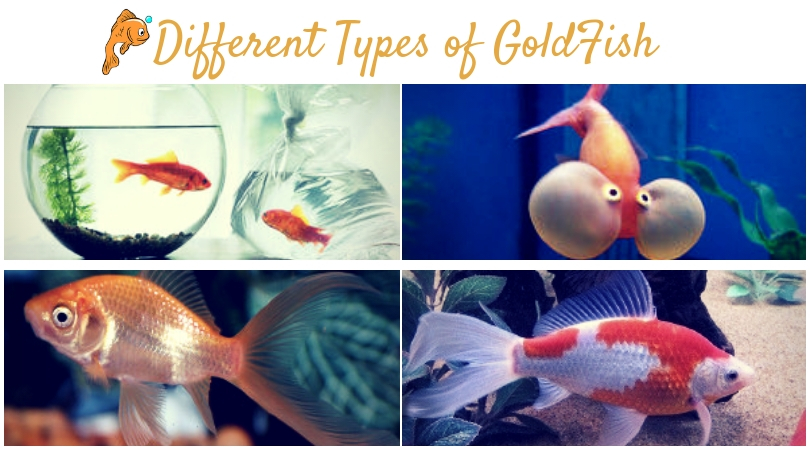 The bubble eye goldfish is easily recognized by the bubbles around it’s eyes. As its name implies, it has two fluid-filled sacs in its eyes that resembles a bubble. The sacs are made up of a membrane that easily breaks when punctured. Interestingly, the punctured sacs grow back. Although the sacs appear to be burdensome to the activities of the bubble eye goldfish, they do not cause any disadvantage at all.

They have the same needs than that of other types of goldfishes. However, they require greater degree of care when it comes to their eyes. As mentioned earlier, the bubble eyes can be punctured easily. There’s a need to get rid of sharp decorations placed inside the tank. It’s also not a good idea to place them together with aggressive types of fish.

The average size of the bubble eye goldfish is six to eight inches. The bubble eye gold fish looks like a normal goldfish at birth. The sacs will only start growing and later on become noticeable at three months.

Paying attention to the details inside the tank is important when caring for this type of goldfish. Clean the tank regularly and maintain a temperature not more than 90°F.

Many people think that all goldfishes all look alike. This is partly true. They all share a specific look that sets them apart from all other aquarium pets. However, there are many types of goldfish available and each bears a distinct characteristic.

The scales of the Oranda goldfish are large and round. It shimmers as it moves. It has a long, flowing tail that fans out when it stops. It grows approximately from six to seven inches.

This kind of goldfish is referred to as the “flower of the water” in China and “Oranda Shishigashiri” in Japan.

Care for the Oranda Goldfish

Being omnivorous in nature, the Oranda Goldfish can thrive from the nutrients it could gain from any type of fish food such as flakes and worms. This type is not very tolerant to pollution. Regular maintenance and care such as cleaning and filtration is necessary. Otherwise, the goldfish will have low chances of survival. Some illnesses common to this type of goldfish are parasitic such as flukes, lice and anchorworms. 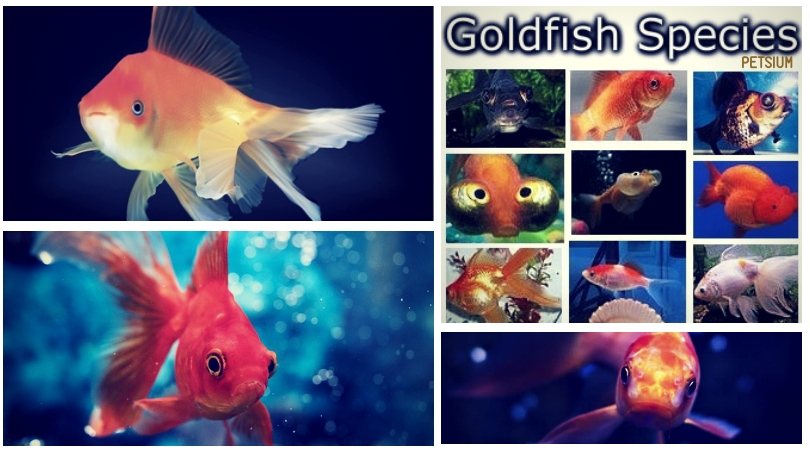 The black moor goldfish is a great addition to any aquarium. Its eye catching black and velvety color makes for an interesting view. Although the black color may fade as the black moor ages, they stay with the same color for a long time. There are very few variations of black moor. They vary in terms of caudal fins.

Goldfish of this species has large eyes that give them slight vision impairment and is also prone to damage. This makes it difficult for them to find food. That’s why the best thing to do is to keep them with fishes that have the same vision impairment so that feeding time will not be a problem later on. Otherwise, fishes that swim faster will consume all the food and the black moor will be left with nothing.

Black moors feed on the same food as other goldfishes. They are also omnivorous. Feeding it with quality flakes and pellets will give it sufficient nourishment but occasional feeding of brine shrimps and bloodworms will also nourish your black moor. Vegetables cut in small pieces can also be fed to the black moor.

Of course, aside from keeping the tank clean and safe from sharp and spiked decorations, the black moor will do well in an aquarium with a temperature of 65-72 degrees F. Aquatic plants are better alternatives for decorations inside the tank.

If given the proper care, the black moor can grow for approximately ten inches. It has an estimated life span of twenty-five years.

The fantail goldfish is best identified by its tail and fins. Its tails and fins are noticeably large and split. The split in the tail is believed to be the indicator of the breeding quality of the fantail goldfish. The more splits the tail has, the better.

This type of goldfish does not require much maintenance, which makes it a good choice for beginners. It is known to survive colder temperatures. They can be kept either in indoor tanks or in outdoor ponds. If chosen to keep in an aquarium, make sure that there is sufficient space for the goldfish to swim in. They should always be kept with other fishes.

If you’ve decided to breed your fantail goldfish, make sure that you provide breeding grounds such as grained beds and weeds as the parents have the tendency to eat their young. Increase chances of survival by adding java moss in the tank. Giving variation to their diet makes breeding optimal. Gradual changing of water temperatures can also trigger breeding in fantail goldfish as it will simulate changes in season.

Feeding the fantail goldfish is not much of a problem. Just like all other types of goldfishes, they will eat anything. Feed them with flakes, pellets, vegetables, worms and brine shrimps. A good diet will prolong the life of your goldfish and also increase its breeding condition.

Generally, this type does not grow as big as other types of goldfish. The maximum size of the fantail goldfish reaches only six inches.